Lehigh vs. Lafayette: A History Lesson as "The Rivalry" Returns to Lehigh Valley

The Rivalry returns home this year. After being played outside of Lehigh Valley for only the second time in its history, returning to the Valley where it means so much to so many.

Lehigh vs. Lafayette is "The Rivalry" and it is no secret any more. The rest of the country and perhaps the world are now aware of our contribution to the great rivalries of college athletics; like Ohio State vs. Michigan, Alabama vs. Auburn, Harvard vs. Yale, Duke vs. North Carolina, Lehigh vs. Lafayette belongs in the conversation because it's on par with the rest.

Last year (2014) "The Rivalry" was shared with New York City, with Yankee Stadium hosting the game marking the first time the game has ever left the borders of Pennsylvania. However it was not the first time the game has left Lehigh Valley. Back in 1891, coincidentally the only year in which three games were played, one of the games was a neutral site game played in Wilkes-Barre, where legend has it the fans were so loud, they scared some of the locals. 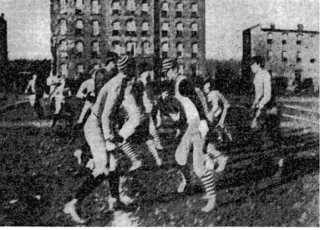 But let's go back into the history of "The Rivalry;" where and when did it begin? And who started it?

Lafayette began its football program in 1882. In 1883 the rules of football were standardized and Lafayette’s manager approached Lehigh offering to play them. Lehigh responded by forming its first team and in 1884 "The Rivalry" began on the football field. But that's not really where it all started.

Although football may be the central sport around which The Rivalry now occurs, it has permeated every other sport, but the seed of “intense competition” that lies between the two schools actually predates football.

The first time the two schools met on an athletic field was for baseball in 1869, but for the passion that now exists, it appears (not to point fingers) Lafayette College started it. Back in May 1881, when Lehigh decisively won the first joint Track & Field event held between the two schools, Lafayette's student journalists had something to say.

Following the loss, the Lafayette College Journal said “defeat in our recent contest with Lehigh University, -a defeat, too, doubly humiliating, coming, as it did, from an adversary in every other respect our inferior.”

Now, this was 1881, so I'm not sure how scathing a "burn" that is, but it seems harsh and it seems to have fanned the flames. 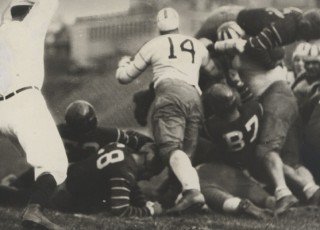 Although the teams saw each other often on the gridiron, 1902 started the modern era of one game per year, solidifying the game as an annual Lehigh Valley event, not to be missed. Due to wartime travel restrictions imposed from World War II, they played each other twice in 1943 and 1944, to fill out their schedules.

This Rivalry, and this football game is a part of Lehigh Valley as much as it is a part of either school. Despite two games not being at “home” for both team, and even having students form ad hoc teams to keep The Rivalry going in some years "The Rivalry" continues on. 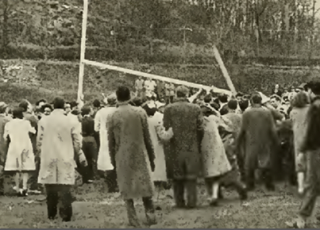 Aside from the many "firsts" that have occurred in the series, three games stand out from the rest. In 1964, the 100th meeting of The Rivalry was a tie that included missed extra points to achieve a 6-6 final. It remains the last tie in the series.

The next moment comes from 1995 with "The Catch." With no lights at Goodman Stadium, the second and final overtime was played at the scoreboard end of the field. The scoreboard lights were brightened to give as much illumination to the players on the field as possible. With little light Aylsworth completed a pass to Klingerman to not only win Lehigh the game but also the Patriot League Championship!

Ten years later it was Lafayette’s turn for last moment heroics. With 38 seconds remaining in regulation on a 4th-and-10 Davis completed a pass to Hurt, that not only was a first down it was the game-winning touchdown for the Leopards. Like 1995, the pass didn't just win the game, it won the Patriot League. 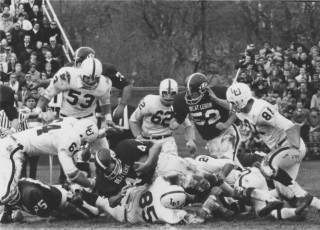 You throw out the records when Lehigh and Lafayette take to the field against each other. Throw them out, seriously, things are about to get heated and records mean nothing when there is this much passion in a Rivalry!

I’m not kidding, when I say that because three times in this series a winless team has won in The Rivalry and each time that one victory made the team's season a success because they beat the one team that matters most, their rival!

And the ways in which we fans of this Rivalry, regardless of side, indulge in the annual tradition has changed as well. It's no longer required to be in the stadium, although it is something that you should do at least once. In 1981, for the 117th Edition of the game, The Rivalry was first broadcast on television and it's been on at least local TV ever since. 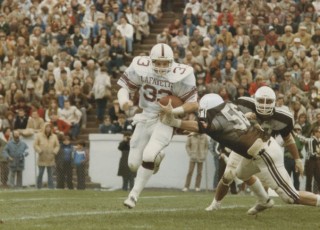 Twelve years later was the first national telecast of The Rivalry as the first college football game ever televised on ESPN2, which had only been on air for less than two months, having just launched in October of 1993.

Three years after the first national telecast The Rivalry went digital with the first internet streamed game going to the interwebs in 1996.

And then finally, ten years after The Rivalry went digital, the first edition of the game to be played on turf and use lights took place in 2006 at Lafayette’s newly renovated Fischer Stadium.

That progress is something to be celebrated by both sides. The technology around the game has grown up and so has The Rivalry, but it hasn't staled.

The passion of Lehigh celebrating its first ever win over Lafayette in football during the 1887 season by setting fire to the stands, their own stands, is something that is now just part of the legend. 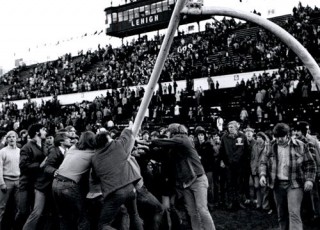 And I have to mention the old tradition of tearing down the goalposts which was as much a part of the game as the kickoff or the tailgate. That is until 1991, when goalpost "technology" changed. In fact, in 1975, three minutes into the third quarter both goal posts were torn down, that’s how much tearing them down meant to the students… They couldn’t even wait for the game to finish!

Lafayette has 11 more wins in the series than Lehigh and since they are only playing each other once a year these days, it may take a while for Lehigh to level the records, but I have this feeling that someday both schools will be closer to each other than ever.

This is a rivalry in the truest sense of the word. Both sides have a passion to beat the other and both sides have the ability to do just that.

Sure, there have been blowouts and streaks, but to have played 150 games and be separated by only 11 wins (Lafayette has 78, Lehigh 67, 5 ties), that shows you how equally matched these two teams are. 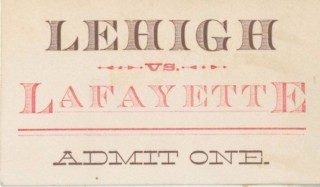 With all that said, all of the passion, pride, history, and tradition, what does it all mean? It doesn't depend at all on where you went to school; you get caught up in it just being in Lehigh Valley the Saturday before Thanksgiving, like every year since 1884 with just that one exception.

So, it's that time of year again, and it's time to don your colors; Brown and White or Maroon and White? Leopards or Mountain Hawks (or Engineers)? Where are you watching the game? Will you be there? Will you be watching at SteelStacks? Or at home? Or abroad?

The answers to those questions will vary from place to place and person to person, but one thing remains the same. The Rivalry is this Saturday and we'll all be watching!