Made in America: The Legacy Tour (6 Days/5 Nights)

Ever heard of Martin Guitars, those wailing instruments played by Bob Dylan and Willie Nelson? Mack Trucks? Atlas Cement? Crayola Crayons? All household names! All produced in Lehigh Valley! Being the “birthplace of the American Industrial Revolution” (as designated by the U.S. Congress) gives Lehigh Valley a tremendous legacy of manufacturing and innovation that has been handed down through the centuries.

On the Legacy Tour, you have the opportunity to explore all of the fascinating stories of how these products came to be, coupled with the inventions and innovations that kept them thriving over the years. 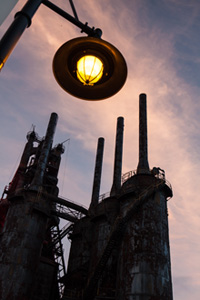 There are also other fascinating Lehigh Valley stories, like the fact that Kentucky long rifles were not first made in Kentucky, they came from Pennsylvania and most of the blackboards in America’s schools came from the Slate Belt north of Bethlehem. On other fronts, Rodale Institute changed American farming forever and Atlas Cement enabled a whole new way of building. And so the story goes, throughout the region.

You’ll be starting your tour in Bethlehem, home of the Colonial Quarter, America’s first industrial park. Here, you’ll also learn the story of Bethlehem Steel, which made many of the armaments used to defeat Nazi Germany in World War II. Next, it’s on to Mack Trucks and America On Wheels, followed by the Allentown Art Museum of the Lehigh Valley. Day three, you’ll find yourself at an iron furnace and cement kiln. After Martin Guitar and the Slate Belt Museum, on day four, you can explore crayons, and more. Just before leaving Lehigh Valley, an air tour lets you put all of the locations in perspective. What a trip! Enjoy it all and the next time you pass a Mack Truck on the road, remember you discovered their story in Lehigh Valley. 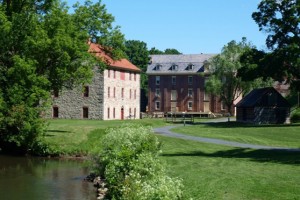 As soon as you arrive in Bethlehem, you’ll be plunged into Lehigh Valley lore by joining the Rise and Fall of Bethlehem Walking Tour at SteelStacks™. It’s a fascinating story, which begins with a good overview film of the once illustrious company that, after making steel for the Golden Gate Bridge, the Hoover Dam, U.S. warships in both World Wars and much of the Manhattan skyline, did not keep up with the times.

From there, you can head for the Colonial Industrial Quarter, located on the banks of the Lehigh River. Today, it is the most extensive center of pre-Industrial Revolution crafts, trades and workshops in the nation. Both the 1761 Tannery and the 1762 Waterworks are National Historic Landmarks. Further up the street, watch the blacksmith who works the forge and hearth in the 1761 Smithy. 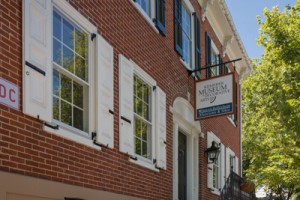 In the time remaining this afternoon, you can explore more of Historic Bethlehem, which includes the Moravian Museum of Bethlehem, housed in the 1741 Gemeinhaus, the oldest building in Bethlehem, and the Kemerer Museum of Decorative Arts, recently enlarged to display more of its elegant collection of Pennsylvania decorative arts, furniture, glassware and paintings.

For dinner, we recommend the Bethlehem Brew Works, featuring a variety of unique local brews, before retiring to your accommodations at Historic Hotel Bethlehem. 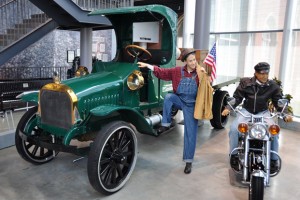 This morning you’ll be introduced to the most famous name in trucking at the Mack Trucks Museum. In addition, travelers who have used a shuttle bus are going to love the original sightseeing bus built by Jack and Augustus Mack in the early 1900s. The bus is flanked by 14 Mack truck models spanning 1907 to 1973, enhanced with photographs and memorabilia that tell more of the story of this famous icon of the American road. 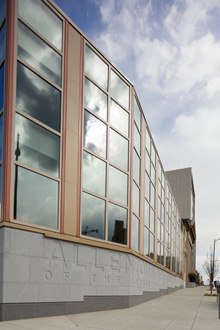 You can continue America’s love affair with the road at America On Wheels, which in addition to your favorite vintage automobiles, illustrates as they put it, “the vehicles that put our nation on the road to international leadership in road transportation.” The South Gallery features examples of the variety of Mack Trucks produced over the years, along with an extensive collection of bikes. In the North Gallery you’ll find the first “horseless carriage” ever made, the first electric car and the first mass produced car. A special exhibition covers the Cadillac V-12 Fleetwood, produced locally in Fleetwood, Pennsylvania.

From there, we recommend lunch at the Bay Leaf Restaurant, before touring the Lehigh Valley Heritage Museum, where you will discover that Lehigh Valley was once the largest producer of zinc in the country. Right around the corner, the Allentown Art Museum of the Lehigh Valley boasts a collection of American paintings and sculpture, along with decorative arts, textiles and costumes. On your way back to Bethlehem, we’ll route you past some of the original silk mills in the region that have been repurposed for other uses.

This evening we recommend dinner at the Apollo Grill before retiring to your accommodations in Bethlehem. 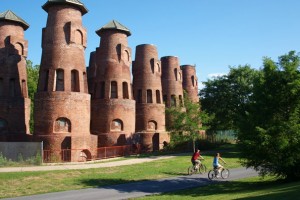 Today you’ll be visiting two very interesting locations which illustrate more early industrial innovations in Lehigh Valley. In Coplay, Pa the Saylor Park Cement Kilns illustrate a new firing method that created Portland cement, a process invention which enabled the construction of the bridges, subways and buildings that transformed America in the late 19th and early 20th centuries. Cement manufactured in this manner made Lehigh Valley the leader in cement production in the United States at the turn of the century.

From there, it’s a short drive to Alburtis, home of the Lock Ridge Iron Works. The first iron furnace burning charcoal was built here in 1868, the railroad junction and two anthracite coal-fueled furnaces which burn hotter than common charcoal and delivered a hotter blast, were added later. By the late 1800s, Lock Ridge was a smelly, dirty inferno where iron men worked 12 hour shifts. 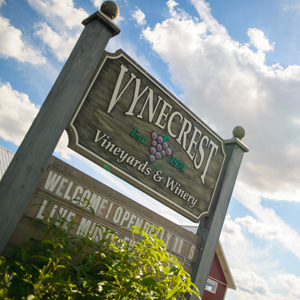 Day and night, the furnaces flamed and four times in every 24 hours, casters pulled the plug on the bottom of each furnace discharging molten metal. These furnaces were the last anthracite furnaces in operation in the United States, and the remains are now the Lock Ridge Furnace Museum. A self-guided walking tour of the site lets you learn the whole story.

Either on your way to these interesting locations or on the way back, you can stop at Josh Early Candies, where the fifth generation of the family is now producing the sweets. At the end of the day, be sure to stop for a sip at Vynecrest Winery, housed in a 19th century Swiss barn. Since you are in the area, plan to have dinner at Glasbern, perhaps the finest restaurant in Lehigh Valley. 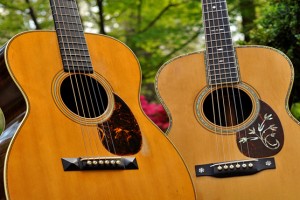 Not many people know that the guitars Willie Nelson, Bob Dylan and thousands of other musicians play are handmade right here in Lehigh Valley by the C. F. Martin & Co. Their story began in 1811, when Christian Frederick learned his craft in Vienna, Austria from a renowned guitar maker. By 1833, he was in America and today’s famous guitar works was born.

We’ve arranged for you to have the two-hour behind the scenes tour (the enhanced version of the factory tour) to witness firsthand the details and exquisite craftsmanship that goes into each Martin Guitar. While there, you’ll also want to tour the museum with more than 200 rare, vintage instruments ranging from Stuffer and Ditson to pre-War and sustainable wood models. Musical giants such as Gene Autry, Johnny Cash, Elvis and John Mayer who have played Martin’s are honored in the museum. The Guitarmaker’s Connection is housed in the original Martin factory in the heart of Nazareth. When it’s time for lunch we recommend Mivajo’s where you might even run into some local legends. 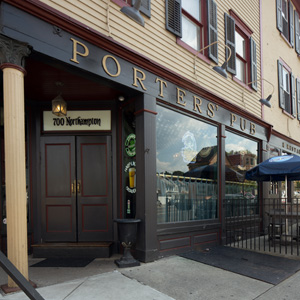 Also in Nazareth, the Pennsylvania Longrifle Museum tells the story of the original, hand-crafted longrifles that ultimately became known as Kentucky Long Rifles. More than 100 of these historic arms are on display, ranging from the War of 1812 and the Civil War, to models used in the American West and those from the early 20th century. The collections are housed in the Henry Homestead, across the road from the John Joseph Henry House filled with furniture, musical instruments, books, tools, paintings and furniture collected by five generations of the family.

A bit further north, the Slate Belt Museum, located in Mount Bethel, tells the story of the production of the nation’s blackboards dug out of quarries in the region. Displays include a reconstructed slate quarry and a unique and fascinating collection of slate art. From there, it will be a short drive back to Easton for your evening accommodations. We recommend dinner at Porters’ Pub. 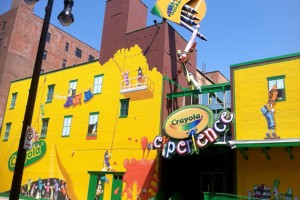 The birthplace of the industrial revolution in Lehigh Valley owes its origins to the discovery of “stone coal,” hard, anthracite, hot burning coal mined in the rugged hills above Lehigh Valley that fueled the first industrial production in the region and heated the homes of millions of city residents.

It was a revolution driven by exceptional people. Hard working, innovative people. People looking for better lives. People seeking religious freedom. People who just believed that they could change their own and everyone else’s world if they just worked at it hard enough. You will learn a great deal about this story at the National Canal Museum in Hugh Moore Park. Be sure to take the mule-drawn Josiah White II Canal Boat to get a feel of what it was like to ply the canal in its heyday. 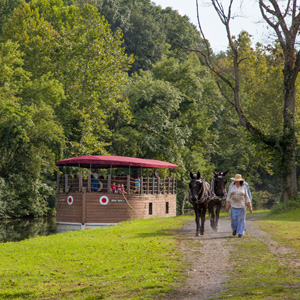 Make particular note of the chairs produced by the German company hanging in the Visitors Center outside the library. That same company produced the original prototypes for the contemporary masterpieces sold by Knoll International that you will see later in the trip.

When it’s time for lunch, we recommend the Vintage Restaurant before stopping at the Crayola Experience™ in downtown Easton. Binney and Smith, the inventors of crayons, produced barn paint and carbon black for automobile tires before they recognized the need for a safe, easy to use crayon. After producing the first box of 8 in 1903, the rest, as they say, is history. Right around the corner, the Sigal Museum introduces you to another Lehigh Valley success story, Just Born, makers of the sweet treat Peeps. 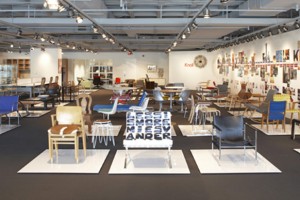 Leaving the area this morning, you can visit the Rodale Institute which has been experimenting with healthier food growing practices and organic farming since 1947. An iPod narrated, self-guided tour takes you through the growing areas, as well as the library and other research facilities. Look for tips you can put into practice on your own patch of green!

And then, the Knoll furniture icons as promised. We have arranged a tour at The Knoll Museum in East Greenville, which houses an unparalleled collection of no longer produced furniture designed by some of America’s most famous modern architects such as Mies Van Der Rohe and Arne Saarinen.

The last stop on your trip, if there is time, is the Boyertown Museum of Historic Vehicles featuring wagons, trucks, cars and bicycles produced right in Southeastern Pennsylvania.

From there, we wish you a safe and pleasant journey home.

Packages available March through October, based on availability and seasonal rate fluctuations. Single, triple, quad and hotel only pricing available. Vouchers and complete directions provided for each trip. Air and car hire (trip cannot be completed without a car) booked by others. Package can be customized to suit client’s needs.