Lehigh Valley Steelhawks Kick Off Fifth Season, This Time at the PPL Center in Allentown

The fun of football season doesn't have to come to an end after the Super Bowl. On Sunday, April 12, football makes its return to Lehigh Valley.

To kick off their fifth season, the Lehigh Valley Steelhawks will make their big move to the PPL Center in downtown Allentown, after previously calling Stabler Arena at Lehigh University home.

But the move isn't the only thing that makes this season exciting. The Steelhawks are fresh off a conference win last season, with a visit to the championship. With some strong players returning to Lehigh Valley for another season, the team is sure to have a successful run for the title. In fact, they won their first (away) game of the season this past weekend. 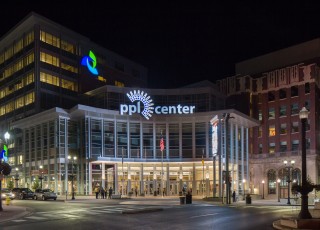 The team is part of the Professional Indoor Football League (PIFL), which includes seven teams in total. In past years, the teams have been divided into two separate conferences. In 2015, this setup has been modified to feature one large pool rather than the two smaller divisions. Instead of the top teams from each division being selected for a playoff run, the top four teams in the league will now face each in the road to the championship at the close of regular season play.

In the continued expansion of the PIFL, there are now three teams from Pennsylvania alone. The Lehigh Valley Steelhawks, Erie Explosion, and Harrisburg Stampede will all face each other twice in regular season play, once at home and once away. The results from these games will be compiled to determine the winner of the first Keystone Cup.

In total, the Steelhawks play six home games. All of the games fall on either Saturdays or Sundays, with the addition of a Friday evening game this year. 2015 home games will be played on April 12 & 18; May 2, 17, and 29; and June 29. Tickets are available for purchase here.

For fans of NFL football, indoor football proves just as exciting- if not more! Many similarities exist between the two styles of football, although there are a few key differences. 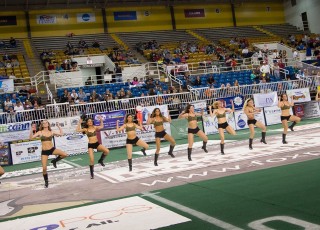 Of course, the game is played indoors. Because of this, the size of the field is cut in half to 50 yards. Getting a peek at Embassy Bank field in the PPL Center is a treat on its own - the turf is black with gold end zones to match the Steelhawks colors. The short field allows for a very fast-paced high scoring game. Full tackles are performed.

Like the football most are accustomed to, the play time for the game remains consistent with four 15-minute quarters. Scoring for touchdowns and extra points remains consistent as well. Unique to indoor football is the UNO. If the kicker successfully kicks the ball through the uprights on kickoff, one point is awarded to the team, hence the name 'UNO.'

In addition to of the excitement happening during game play, there are tons of activities to enjoy on and off field throughout the event. A number of on-field games and promotions take place during time outs and between quarters. Fans will be selected to participate in these, and the whole crowd helps to cheer them on.

Pregame and halftime entertainment are presented by the Precious Metal Dance Team, the area's only professional team. I'm excited to be continuing my third season with the team- be sure to say hi if you're at a game!

At the close of the game, fans will have the chance to head down onto the field to meet the players, dance team, and Steelhawks' mascot Talon for autographs.

Both season tickets and single-game tickets are available at affordable rates for the whole family. Reserve yours by calling the Steelhawks office at 610-282-3100 or online. For more information, be sure to check out their website at lvsteelhawks.com.