The PPL Center in downtown Allentown isn’t opening until September, but the hype surrounding upcoming concerts is already red hot. Before the Lehigh Valley Phantoms of the American Hockey League even take the ice, both the world-renowned rock band The Eagles and Cher will fill the new arena at Seventh and Hamilton Streets with music and excitement!

The Eagles were the first concert announced for the PPL Center and will play on September 12. Cher was recently announced and will take the stage on September 15. The center will also host Professional Bull Riding October 10 - 11. These acts mark a sea of change in Lehigh Valley entertainment, as there is now an 11,000-seat facility suitable for large touring acts. The Eagles’ concert was sold out in less than a day, representing the excitement Lehigh Valley has for the arena’s presence. 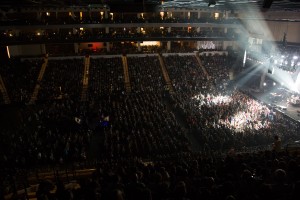 The PPL Center will be the region's largest indoor facility, which is substantially larger than Stabler Arena's capacity of 6,000 for concerts on Lehigh University’s campus. Just about 100 events a year are expected to be held at the PPL Center each year; this is in addition to the hockey team’s 40 home dates. These events will include family shows and other sporting and special events (think Disney on Ice!) that are sure to be exciting for your group.

For more information on the PPL Center, visit PPLCenter.com often as the line up is ever-changing.