And now the field starts to take shape as the first round is complete and we move on to round two!

There were a few lower seeds that moved on, a few close calls, and one potential Cinderella has appeared. So let's get to it.

Round two highlight matchup? #4 Musikfest vs. #5 The Great Allentown Fair. 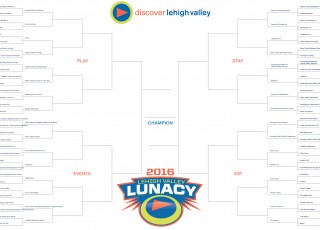 Our seeding maintains it's relative steady hand with all but one higher seed advancing. The lone exception again in the #7 vs. #10 matchup, with #10 Hyatt Place Bethlehem taking #7 Grand Eastonian out of the bracket.

The Cinderella of the tournament comes from this region with #12 Taza Truck upsetting #5 Aladdin Restaurant, to be the lowest seed moving on to the second round.

So now, it's time for you to decide. Will the higher seeds maintain their advantage? Will Taza Truck keep it's Cinderella run for another round? It's your call. Vote NOW!