There is no doubting the momentum of these elite eight is higher now than it was at the start.

So, who has made it this far and who will be moving on? The first will be announced here, the second is your vote.

The Lehigh Valley Zoo has overcome the Lehigh Valley IronPigs for the second consecutive year, to get them one step closer to a repeat appearance in the final four. Meanwhile their opponent, State Theatre Center for the Arts is moving on past newcomer Lehigh Valley Phantoms for their first chance at a final four spot. This one comes down to the Animals vs. the Players!

This year's elite eight matchup of Events is a rematch from last year's sweet sixteen, between Musikfest and Celtic Classic Highland Games & Festival. So it's an all Bethlehem regional final for Events this year; The Battle of Bethlehem Festivals! 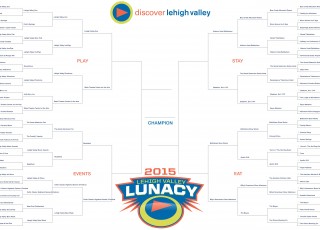 It is now time to vote on the elite eight and who makes it to the final four. The remaining round schedules are as follows: