2015 Lehigh Valley Lunacy: Down to the Final Four

After four rounds each cutting the field in half, we are down to four. And only two can move on.

So, did any of the lower seeds move on? Is there a new Cinderella? Let's find out.

The Lehigh Valley Zoo is once again dancing into the final four, having defeated State Theatre Center for the Arts in a #1 v. #2 battle that was close as expected.

With the top two seeds out of the way it was #4 Musikfest losing out to fellow Bethlehem festival #3 Celtic Classic Highland Games & Festival. This is the first final four for Celtic Classic 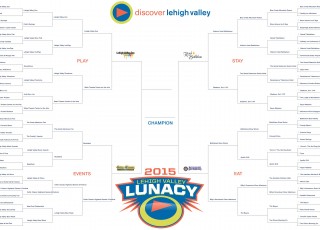 #1 Bethlehem Brew Works has done well in the shoes of their counterpart, last year's Eat Champion, Allentown Brew Works, and is going to match that feat this year by moving past #3 Billy's Downtown Diner Allentown.

It is now time to vote on the final four to determine who will make it to the championship round.

The remaining round schedules are as follows: