2015 has marked the third edition of Lehigh Valley Lunacy and we're down from our starting 64 participants to just two remaining candidates vying to take home the Championship.

Who's moving on? what is the final going to look like?

It's going to be "The Battle for Bethlehem" as Celtic Classic Highland Games & Festival will take on Historic Hotel Bethlehem. 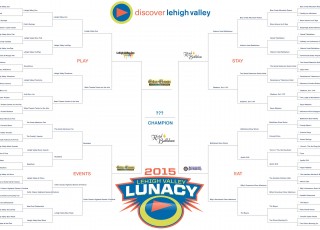 Celtic Classic Highland Games & Festival has a bit of an edge going in, by virtue of defeating last year's champion Lehigh Valley Zoo, but Historic Hotel Bethlehem's victory over perennial powerhouse Bethlehem Brew Works was enough to ensure both teams are surging into this final.

The only difference for voting in the final is that we require an e-mail and only allow one vote per e-mail to keep the voting fair.

This round ends March 29th and the winner will be announced March 30th! So to have the largest impact share, share away.

Who will win "The Battle for Bethlehem" and become the 2015 Lehigh Valley Lunacy Champion? It's up to you!